One of the fun parts about coding is when you figure out a new way of doing something. As you solve problems in your app, you learn how to make your code more efficient. It’s problem-based learning–you become engaged in teaching yourself what you need to know to solve the problems that are before you.

So when Daniel Christian presented an app that demonstrated a scheme for expanding and collapsing controls, I took him up on his challenge in which he invited others to add to his app. My goal was to do some problem-based learning as I figured out how to use ‘easings’ in animation. I wanted the expand and collapse UI to accelerate and decelerate like this:

Previously I had a lot of fun making a multiplayer version of Tic-Tac-Toe the last time Daniel had posted an idea. I had been wanting to create a multiplayer mechanic in PowerApps, but never got around to it. So it was a ripe opportunity to do some problem-based learning while I tried implementing multiplayer for the first time.

This is a series I would like to start called the “PowerApps Remix.” It’s simple: you take someone’s app and add onto it. You can remix for style, efficiency, methodology–whatever you think up! Then share it again so others could remix it further.

If you’d like to remix an app of mine, maybe you could make an Android or Windows 10 version of my iPhone fake text generator. In the mean time, enjoy this guide on creating an expanding and collapsing control within a gallery.

A gallery is an efficient way of repeating controls. Below is how I reduced the amount of controls needed to achieve this UI. There could be fewer, but I maintained some controls to indicate to the developer what’s going on. 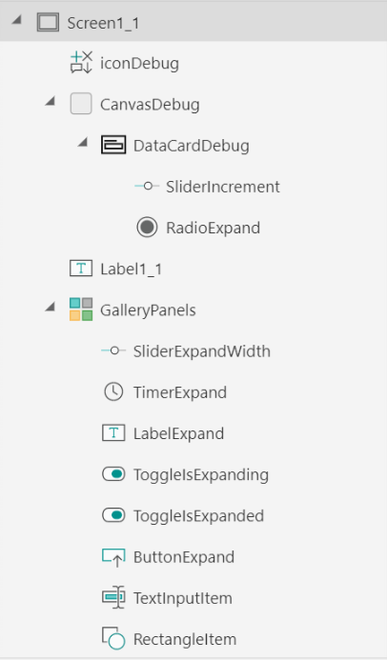 Most of the controls remain hidden, and they are revealed when you click a wrench icon. 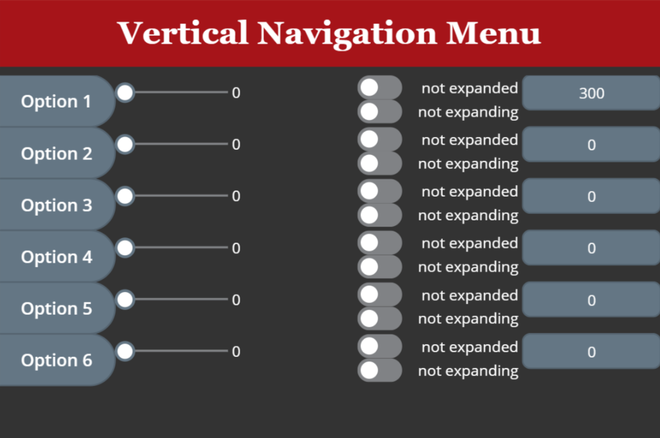 Using a gallery cuts down on the variables needed. In the original expander UI, a different variable was created for each of the 3 items. It is a good way to visualize how you want objects to function in your app. The next step is to leverage the table/gallery structure to reduce the variables needed. 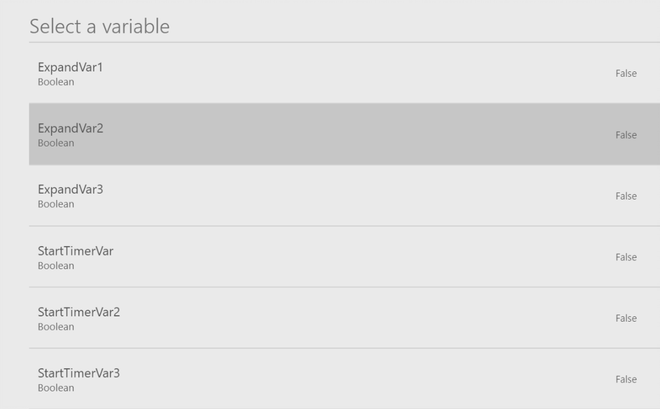 In this gallery method, I use 5 variables and a collection.

Note: I use “panel” to describe the rows/items in the gallery. I will use those terms interchangeably in this blog post. 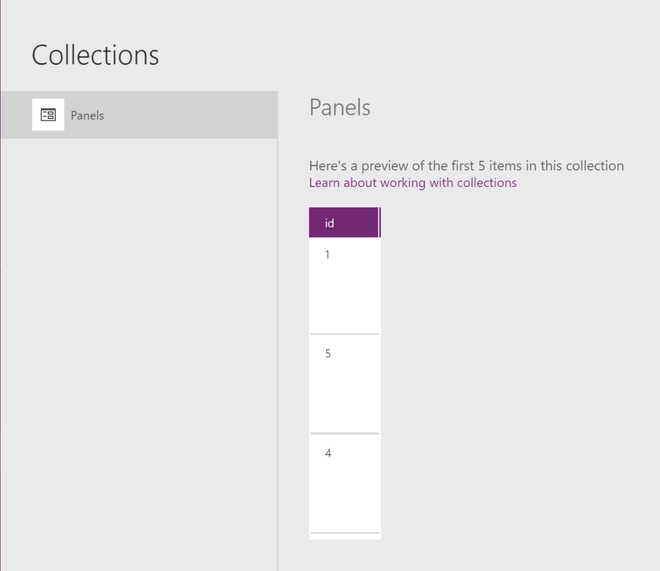 The button will trigger expansion or collapse. Change ButtonExpand.OnSelect to the following formula:

Upon ending, the timer will add or remove the selected panel from a collection of panels that have been expanded.

There are a few more properties to change for TimerExpand:

You’re going to be checking to see if a panel has been expanded in multiple places. So rather than copy pasting the same condition everywhere, you can stick it into the default property of a toggle. Then you can reference that toggle wherever you need the condition.

This means, “A row in the gallery ‘is expanding’ when it is the one that has been selected and the app is expecting movement (expandPanel is true).

This means, “A row in the gallery has been ‘expanded’ when its ID number can be found among the ID numbers of panels that have been expanded.”

Each row in the gallery will have its own result in the toggles. Based on our setup, at any given time, only one panel will be expanding or collapsing. (Remix idea: allow multiple panels to expand or collapse)

The slider control is great for storing 3 numeric values: a minimum, maximum, and current value. This happens to align with our needs:

Configure the minimum and maximum widths:

And without further ado, this is what you came for–SliderExpand.Default:

There’s a lot of things going on in the formula above–and you do not need a lot of it. You could actually reduce that big formula to just:

My formula is the same as Daniel’s with a few tweaks. Here’s the formula from the original expand/collapse UI:

And here’s the part of my formula that is equivalent:

Instead of using 768, I changed it to SliderExpandWidth.Max since that’s the property where I store the same number. The name of my timer is TimerExpand, and not Timer1. And I had already determined if a panel is expanding with ToggleIsExpanding; the variables addPanel and removePanel determine its direction. My combination of variables is equivalent to the original ExpandVar1, 2, and 3.

In the image below, you’ll see in the red box that I had included an additional calculation for expanding the panel. It used a math function to advance the expand animation in a more natural way than expanding at a constant speed. It also requires a radio control so you could switch between the two calculations. You don’t need this part.

The last part is kind of unnecessary. In the image below, I placed this last part into the formula to avoid any problems with the timer’s reset property. It means, “If the panel is fully expanded, set its width to the maximum width (768), otherwise, set it to the minimum width (0 in our case).” You could probably get by without this section.

For advanced users, if you’re interested in other ways of calculating the variable width, look into the concept of ‘easing.’ Here are two websites that were helpful to me:

I took the sinusoidal in/out formula from the first website and replaced the variables with the names of controls in the app. I had been wanting to try this for a while and this UI was a good place to exercise it.

What I found is that with a 300ms expand time, you likely won’t see too much difference between the linear method and this fancy sinusoidal method. I placed a slider in the debugging panel so that you could fine-tune the incremental width that the UI expands.

That’s all the big changes that I made in my remix. Check out the remixed app here: 1drv.ms/u/s!AvtvG5BA8E3vj6ELcCXg48QsfRYUWw

So are you ready to remix it some more? Will you remix my fake text generator?